Bat problem on the North Shore of Montreal?

Find out everything you need to know about bats and how to eliminate them from your neighborhood. 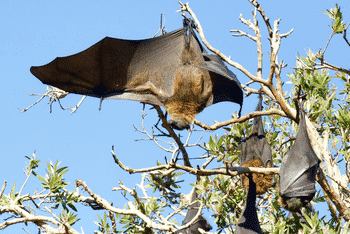 The bat, which is warm-blooded, is a mammal of the family Vespertilionidae and order Chiroptera. They are in fact the only mammals that can fly. In Canada, nineteen species of bats have been identified. The big brown bat (Eptesicus fuscus) is occasionally encountered, but it is especially the little brown bat (Myotis lucifugus) that infiltrates the interior of buildings. This one measures between 8 and 9.5 centimeters. It weighs an average of 6 to 12 grams, has a brown coat with copper reflections spotted with gray marks on the belly and its hair is darker at the level of the shoulder. The big brown bat is dark brown in color, with a paler belly than the little brown bat. Its weight can vary between 11 and 21 grams and it measures from 10 to 12.5 cm. In flight, the bat appears larger than it actually is because of the span of its wings. Insectivorous species have eyes that are not very visible, but some species have very good vision. Their ears are prominent, with a large pavilion and an amply developed tragus. They therefore enjoy good hearing. In addition, bats orient themselves primarily by echolocation. The ears have in fact the role of a radar which captures the ultrasounds emitted by other bats or the echo of their own ultrasounds.

Taste and smell are also well developed in these mammals. They are insectivorous and capture their prey in mid-flight. A single bat can easily capture 600 mosquitoes in an hour. It will be found most of the time near a water source, because the bat needs a lot of water to survive due to the large evaporation surface of its wings. Bats are nocturnal, during the day they are found suspended by their hind legs, their heads upside down and their wings surrounding their bodies, this is the position they prefer to rest, because it allows them to retain their body heat better. Indeed, bats are very sensitive to temperature variations.

Mating takes place in autumn and ovulation only takes place in spring, in fact, the sperm is kept in the genital system of the female until the return of heat, where there will be fertilization.

The female will give birth to one bat, sometimes two, around mid-June. The little one will cling to its mother during the first days of its life and will follow it everywhere during its travels. In August, the young are nearly independent, but must follow the adults to learn where shelters and feeding areas are. In both bat species, the average life span varies between eight and ten years.

In summer, they are found in buildings, attics, church towers, barns, in hollow trees, under bark and in caves. In winter, it is mainly in mine galleries that the little brown bat hibernates, while the big brown bat is more often found in our cellars, attic windows, in addition to the mines. Bats need favorable conditions for hibernation, such as high humidity and temperatures above freezing. In addition, they often return to the same place year after year.

The little brown bat remains in a colony, except to give birth. The males, during this period, will find themselves in cooler places. The big brown bat is rather solitary, although it can sometimes be found in small colonies.

Elimination of the bat

Some advice when you have a bat problem :

Bat elimination by a certified exterminator

At Rive-Nord Extermination, we have the expertise required to permanently eliminate bats from your surroundings. Our extermination technicians will be able to identify and solve the problem quickly. Contact us today!